I thought I'd post some design notes for the curious who want to know what I do when I'm not drawing, reading, or writing. I'm hoping to start a new series featuring a revamp of my old Angel of the Month series that got started, but never finished. What better way to get in the mood than to do a mask inspired by similar themes?

Like most of my paintings and writings, mask-making begins with a little research. Nothing gets my muse tingling more than lore of the land!

On January Lore
January may seem like a boring uneventful time, but the lore of the month is fraught with interesting imagery. Named for Janus, the Roman god of beginnings, endings and gateways, January is a time of hope, purification and the promise of a new beginning.

The birthstone for January is the Garnet, which can be found in clusters and is often equated to pomegranate seeds which are in turn associated with the damnation of Persephone to the Underworld. The grasp of Hades is coming to an end as January begins and Persephone awaits her time in the sun, ushering in the Spring.

January's flowers are the Carnation and Snowdrop in western cultures. Carnations, while seen as a generic flower of affection and reunion in florist shops, have a darker meaning in Mexican Indian culture, where they are 'flowers of the dead' piled around the bodies of the recently deceased before they are buried.

In Korean lore, three carnations were used to divine which phase of an individual's life would contain suffering and hardship by watching to see which flower would wither first upon being placed on the forehead. The Snowdrop's habit of popping up through the snow in graveyards became a portent of death and ill fortune to the Victorians.

Mask Layouts
Informed by the themes of January's lore, I worked out a few thumbnails to get a basic idea of the shape and flow I wanted in the mask.

The 1st one was the most ambitious featuring piles of flowers at the edges. Too busy, however (and a little evil-looking)! The 2nd had a nice contrast between details and texture, but it didn't feature the Snowdrop element as much as I wanted. The third seemed the best balance of the Snowdrops at the side of the eyes, the Carnations in the middle and a graceful compositional flow from the center outward and into the eyes and brow.

Tracing, Carving, Tooling!
Next came drawing the pattern onto printer paper, transferring to leather, a cup of coffee, tooling and carving with chisels and burnishers, and finally shaping and baking the leather! If you want to learn more about the specifics of the process, I learned from the best, Andrea Masse, Brenda Lyons, and my own experimentation. 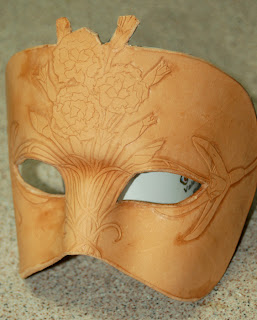 Final Design
After some careful painting with acrylics and a few layers of satin varnish, the final product emerges! It came out rather Christmas-like, but that feels somehow fitting for this type of moody January.

For more crafts from me, check out my artisan account on DeviantART.
(It's where all my hobby endeavors wind up these days!)
Posted by Angela R. Sasser at 11:58 AM 1 comment:

Setting a Cabochon in a Leather Mask

With all of the crafts I've been working on for my display at DragonCon, I'm really pushing my limits as a mask-maker and trying techniques I haven't before, including setting gemstones. I took photos during this experiment and thought I'd turn it into a tutorial for you all!


(Many thanks to Brenda and Andrea for their useful tips on this.)

Figure out where you'd like to place your cab in the mask.  Higher up on the forehead where the surface lays flatter is an easier area to do this.  Once you place the cab, trace around the outside with a pencil.

PROTIP:
I placed mine a little too low on the forehead where the mask curves in towards the bridge of the nose, which led to my cabochon bezel looking a little askew in the finished product due to the leather warping around the cabochon opening.

Do yourself a favor and place your cabochon higher on the head than I did. 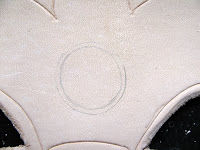 Next, trace about 1/16th of an inch in from the outside of your cab's outline.  You can do this with a compass or a stencil, but I did it very carefully by hand.  It doesn't need to be ultra precise, but it does need to stay true to the shape of your cabochon, which might not be perfectly round anyways.

The opening should be slightly smaller than your cabochon so that the edges of the cab will be hidden once it is put in place beneath the leather surface so that the upper portion protrudes through the opening. 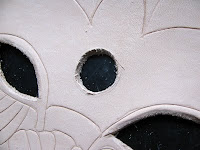 Very carefully and slowly, cut out the opening of your cabochon along the inner line you drew.  Don't worry about the outer line being visible as that's going to be beveled off in a later step.  Notice I miscut while I was cutting out my opening? I was able to save this mask by beveling out that mistake. 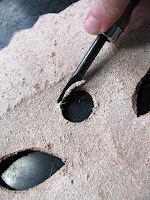 Using an Edge Beveler (I used a Sz 2), bevel off the edges on the flesh side and the rough side of the opening.  This creates a rounded, more professional edge.  The area of this bevel edge on the flesh side will also act as the fake bezel for the stone in the finished product. 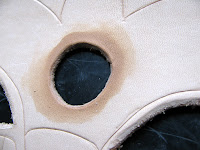 Using Gum Tragacanth is entirely optional, as you can simply smooth an edge with a burnishing tool of some sort.  I find that if you use Gum, however, that it more efficiently and permanently smooths frays and rough areas.

Take a damp sponge and dab Gum Tragacanth onto the freshly beveled edges then rub a Bone Folder or Modeling Spoon across the edge until the leather becomes slick, dark, and shiny.  This helps to smooth all the frays in the leather.

PROTIP:
If you're using leather dye instead of acrylics for your color, be warned that applying gum might cause the leather to be lighter in the area where dye has been applied.  Acrylics, however, seem to have no problem coating right over the top of leather slicked with gum. 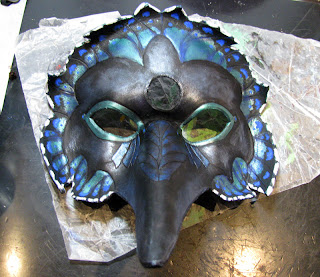 Before you set the cab, you'll need to finish the rest of your mask.  Get all of your dying, painting, and varnishing completed.  Now the cab is ready to pop in the hole! 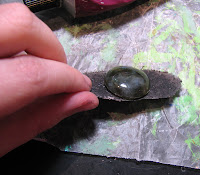 Using a dab of Goop, glue the cabochon to the scrap of thin leather and wait a few minutes for it to set.

Attach the scrap leather with the cabochon to the mask with the leather cement. Apply the glue to both surfaces then firmly press them together and hold them in place for at least a minute.  You also want to press firmly on the cabochon so that it protrudes through the opening and fits snugly in it.  Be careful not to force it all the way though! 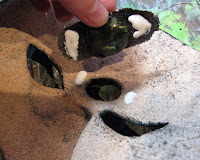 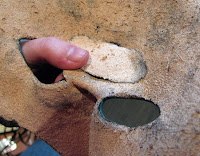 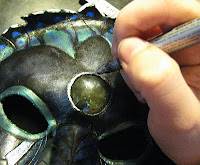 Using the silver paint pen, carefully draw the bezel around the edge of your cabochon.  Be sure not to get any paint on your stone!  The bezel looks most convincing when it fills in the small beveled edge that surrounds your stone.

PROTIP:If you should get paint on your stone, quickly wipe it away or lightly scratch it out with the edge of your fingernail or credit card. Rubbing alcohol is a good last resort as well. 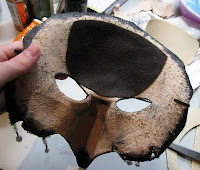 Success! The cabochon is attached!  You don't want the edges of the scrap leather chaffing the wearer's forehead so I cover the area up with sticky-back felt. Just cut the size you want, peel off the sheet from the back, and stick it on the mask.

My piece was old and had lost some of its stickiness, so I used Goop in key places to make sure it would stay.

Sponsor my work on Patreon and receive exclusive rewards!

Angela R. Sasser
I'm an artist, writer, and mask-maker with a passion for telling stories and helping other artists find their inspiration. I have an MA in Arts Administration with a focus on e-marketing and evolving audiences.