Ah Lady of December! She was the painting that started it all. Back then, however, I hadn’t started making masks to match each Lady yet. Now that I’ve decided to challenge myself with this multimedia element, it’s time to revisit December’s themes as a mask!

The birthstone of December is Turquoise and the flower is the white narcissus. I’ve actually done prior research into the structure of this flower for the Advent Angel piece created for my Spirits of Winter series, who was actually the prototype birthstone image I did before I switched to the Ladies of the Months’ rectangular format instead.

The funny thing about white narcissus is that they share a lot in common structurally with daffodils, being a variant of a similar plant, so I had some warm up with this flower already thanks to March’s mask and the aforementioned Advent Angel. I love the way the corona of petals overlap to give this flower its unique shape! I decided to go with the more rounded star-shaped for this mask, since I like the simplicity of it, which is much easier to carve.

I was actually pretty happy with my first try at this design. The flowers have elegant sweeping stem structures that fill up the space nicely with the bunches of blooms in the middle, crowning the mask in a balanced way.


Here are some shots of the mask during the tooling phase and after it was baked and hardened. I’ve tried something different with the tooling for this flower by adding many thin lines in the petals with a stylus to give it a delicate textured feel. This is actually the same technique I’ve used to add texture to butterfly wings in leather.

December’s mask proved to be too ambitious of a challenge when it came to painting! I had a mental image in my mind where golden veins would shine through a crackle texture of turquoise, much like the turquoise gemstone itself. However, the end was not so beautiful as my mental image. The crackle medium never seemed to work right on top of the gold dye I had used.

I would remember later that crackle medium requires you to seal the underpainting since dye leaves leather porous, which interferes with the crackle effect. The final look of the mask with the gold underpainting as a patina also made the mask look unfinished and sloppy, rather than antiqued.

Sometimes you have to kill your darlings and I decided to start over from scratch. If anyone would like this ‘reject’, drop me a line and I’ll give it to you for a good deal!

Starting the mask over from the beginning was frustrating, but at the very least, I could fix some of the carving errors I made and create an end product I could be fully proud of, rather than creating a sub-par end product.

This should also be a lesson to ALWAYS make test strips when using effects with special paint mediums just to make sure they’ll work right. Even in trying the crackle medium a second time, the crackles just weren’t dramatic enough!

On this second attempt, I used an underpainting of a darker green acrylic paint to create contrast and also provide a non-porous surface for the crackle medium. Even still, the effect was not as dramatic as I was hoping. Such is life! I sense a search for the perfect crackle medium in my future. You can see in the progress shots where I used a white underpainting on the floral elements to help make the colors that would come later brighter. The image on the right shows the completed mask after a Satin varnish has been added. The varnish adds a subtle shine even to the matte elements, which I really enjoy.

This mask is available at my Etsy shop!
For more in-depth instruction with complete step-by-step narration, a materials list, etc., check out this Premium Video Tutorial featuring the creation of February's Mask. 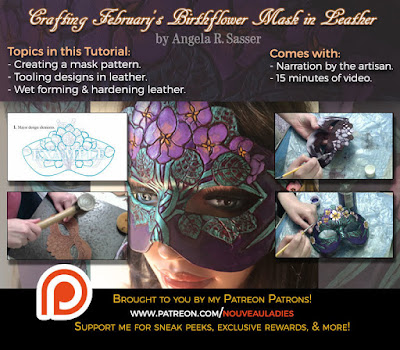 Like this series and want to help it be the best it can be?
Sponsor the Ladies of the Months on Patreon!

In return for your support, you'll receive early access sneak peeks, digital goodies, and more!
Posted by Angela R. Sasser at 8:26 AM

Sponsor my work on Patreon and receive exclusive rewards!

Angela R. Sasser
I'm an artist, writer, and mask-maker with a passion for telling stories and helping other artists find their inspiration. I have an MA in Arts Administration with a focus on e-marketing and evolving audiences.